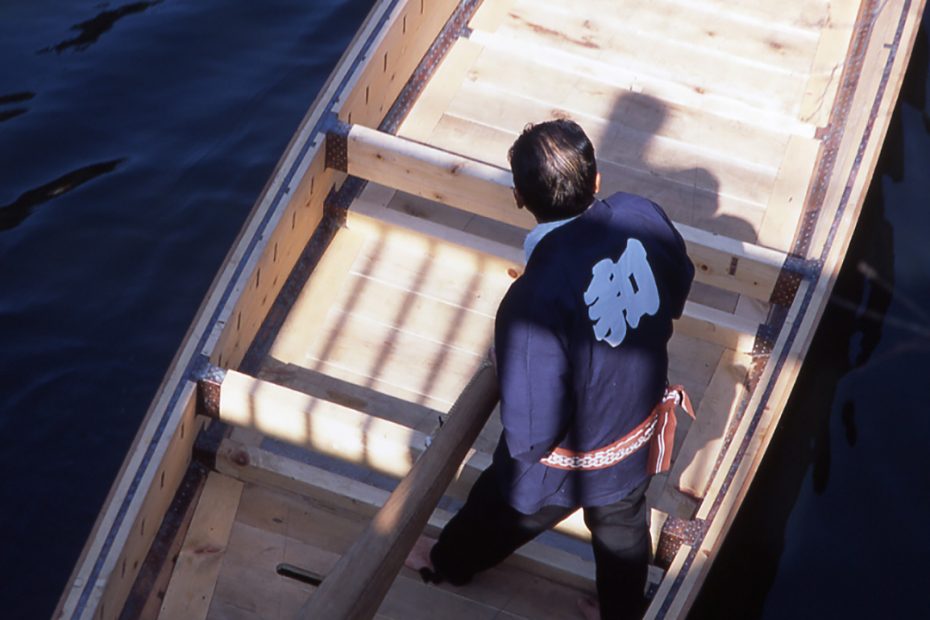 This is an article from 2003 about the work of Japanese-boat builder Douglas Brooks. Brooks was helping to preserve Japanese boat-building skills, which were rapidly disappearing.

I still feel privileged to have been able to report on his work. (This article was first published in Look Japan magazine, 2003)

Two Men and a Boat

Douglas Brooks, an American boat-builder, is struggling to save a Japanese tradition that’s sinking out of site fast.

During his childhood and most of his working life 76 year old Fujiwara Kazuyoshi lived by the banks of a tributary flowing into Tokyo’s Sumida-river. As a master boat-builder he made river craft for the fishermen near his home. Then, one day in the 1970s, the city buried the stream under concrete and tarmac and his boat-building work dried up as fast as the water that used to flow past his front door.

Decades later, on a bright fall morning in a ramshackle workshop virtually under the eaves of Tokyo’s Koto-ku city office, he’s taken up his old tools again, but today he has a student, an American, Douglas Brooks. The two carpenters are building a three meter long cedar and cypress-wood Japanese boat. Neither seem much disturbed by the noise of traffic from the streets surrounding them or by the November cold or by the occasional curious faces at the workshop windows. There’s a sign on the wall prohibiting talking in the boat-shed and they work in silence until their break. Douglas hands me one of the two cans of coffee set on the edge of the electric stove to warm.

He explains how he is learning to build a ‘Chokibune’, a long flat river boat used during the Edo-period to transport people along Tokyo’s waterways (‘a kind of a Japanese gondola’). It is being made from a single cypress tree and a single cedar, both picked out from the forest by Fujiwara-san. Douglas makes sure to introduce me to his teacher and we chat about the project and their work together.

‘It’s the just the same teaching a foreigner as teaching a Japanese person. He’s a very diligent and obedient student. It normally takes eight years to become a boat-builder . . . but if he uses his time well he will learn how to make a Japanese boat.’

The break over, I watch the two men at work again. A schoolgirl stands and stares through the door for a few minutes and then leaves. One middle-aged lady wobbling past on grocery-laden bicycle stops and dismounts.

‘You’re that American I saw on TV yesterday, aren’t you?’ she blurts out.

Douglas explains about his appearance on a TV news program the previous evening. But, the small measure of fame he’s enjoying now is a big change after his first visits to Japan.

‘I came here eight times before anyone paid my ticket. I’ve slept on railway platforms. . . then I would go home and save my money until I could come back to Japan.’

His first trip was in 1990. Already a boat-builder in the United States he came to Japan as a tourist and spent three months looking for traditional Japanese boats in fishing villages along the coast of the inland sea.

‘I didn’t expect to find any boats, but I found hundreds’

Three years later he was back, this time to interview the boat-builders and to begin the documentation of the craft. He was particularly interested in meeting the builders of taraibune, a kind of small round boat or coracle. Douglas traveled to the island of Sado in the Sea of Japan.

‘I found two builders, but I never saw one again, he died a year after I met him’

Douglas discovered that the remaining craftsman, Fuji Koichi, had no-one to whom he could pass on his knowledge.

‘He couldn’t find a Japanese student . . . his son became a policeman, his daughter a housewife and they both moved to the city. There’s a different culture here . . . the west has rediscovered [traditional] crafts but here it’s still low-status, blue collar work’

On his third visit to Japan Douglas became Fujii-san’s ‘deshi’ (student). He lived for two weeks in Fujii-san’s home learning how to make the taraibune and helping with the rice-harvest. When Fujii-san passed away in 1996, Brooks realized he was the only student of the last taraibune builder. That year he was invited by Fujii-san’s wife to come back to Sado to finish the construction of his teacher’s final boat.

Douglas’s current project (funded by the U.S. based ‘Freeman Foundation’) is to document the techniques used in the building of three different types of Japanese boat. He estimates that he has taken several thousand photos and shot over twenty-five hours of video, but he is well aware that his techniques are very different to the way boat-builders have worked in the past.

The tradition of ‘nusumigeiko’ teaching or ‘stolen learning’ meant that the boat-building techniques could only be passed on directly from master to pupil. Even then, the teacher was often loathe to divulge his secrets for fear an able pupil might better him and set up shop down the street. The students were forced to watch and steal what learning they could though a lengthy poorly paid apprenticeship.

‘Skills are precious . . . the master was protecting himself from the student. If the students were going to get the secrets, they had to steal them. My taraibune teacher said “I used to go into the masters shop at night with a candle”’

Yet, asked if he’s ever had a negative reaction from craftsmen jealously trying to preserve their secrets, Douglas answers emphatically:

On his earlier trips to Japan Douglas met and interviewed seventeen different boat-builders.

Alex Kerr, the author of ‘Lost Japan’ and ‘Dogs and Demons’, has worked hard to draw attention to the neglect and decline of Japan’s traditional arts.

‘Japan has generally turned its back on traditional craft of many types; paper-making, kimono weaving and dyeing, barrel-making, brush making, you name it, they’re all in decline, and in the 90’s the speed of the decline was drastic.’ he says.

‘I put the collapse of craft at the feet of what I call “the victory of the industrial mode.” Japan set out after world war two to build a new economy on manufacturing industry – and that alone – and everything was sacrificed to that goal.’

He argues that service industries, including tourism, were neglected as a consequence of this drive. It is a mistake that the Japanese government has only lately woken up to:

‘Recently the government has realized that tourism is an important industry (the world’s largest), and there is a big campaign afoot to revive it.’

Perhaps one of Douglas’ boats has already become part of this revived tourist industry? On a sunday morning several months after my visit to Fujiwara-san and Brooks’ Koto-ku workshop I accompanied Douglas to the ‘wasen tomo no kai’ [friends of the Japanese boat]. Each week at the Koto-river park a group of boat builders take Tokyo residents and visitors out on the water.

On the way to the pier we walk past a pond and a clutch of photographers all focusing thousands of dollars of lens technology at a solitary bemused-looking kingfisher. Trying to crop out the office windows glinting through the trees, perhaps? A short walk and a century away, a trip on Douglas’ now complete and river-worthy Edo-era craft is an altogether different sort of escape from city-life. The passengers, all ages and several different nationalities, are obviously enjoying the beauty of the craft, the skill of the oarsmen and the fine weather.

Douglas sees potential for Tokyo’s rivers and canals, ‘When I look at the wasen tomo no kai and what they do there and how popular it is, I can’t help but look at a lot of the other waterways in Tokyo and think . . it would be incredible if there were traditional boats here!’

As Alex Kerr points out: ‘Tourism is one way in which boats such as [Douglas’] could find a place in Japan’s new society. His idea of putting such boats into the moats in Tokyo is a great one; ideas like this make a successful tourist industry and add interest to drab towns.’

And as Fujiwara-san, who thought he had built his last boat twenty years ago, says, ‘Its better to use Japanese boats than to just look at them in a museum’.

Brooks himself realizes that there is still a lot more work to be done to save Japanese boats from a dry future gathering dust in museum halls.

‘We’ve got to preserve the basic boat-building skills. I have sketches of literally . . step 1 through 5 of pounding a chisel into the wood . . because there is a certain way it has to be done. I need to record to a level of detail so that in 50 years a competent woodworker could read my text and do it right’.

He is even thinking of approaching some of Japan’s new craft universities with the idea of setting up courses in traditional boat-building. Last spring he went back to the island of Sado to build two more coracles, and he even began to train his own ‘deshi’ or apprentice, a 36 year old carpenter from the island. Douglas explains how he passed on all his diagrams to his student as well as showing him how to build the boat.

‘We are doing the traditional thing and the modern thing’

And what about the tradition of nusumigeiko, ‘stolen learning’, and the secret skills of boat building? Is his apprentice creeping into the workshop at the dead of night with a candle to pilfer the master’s techniques?