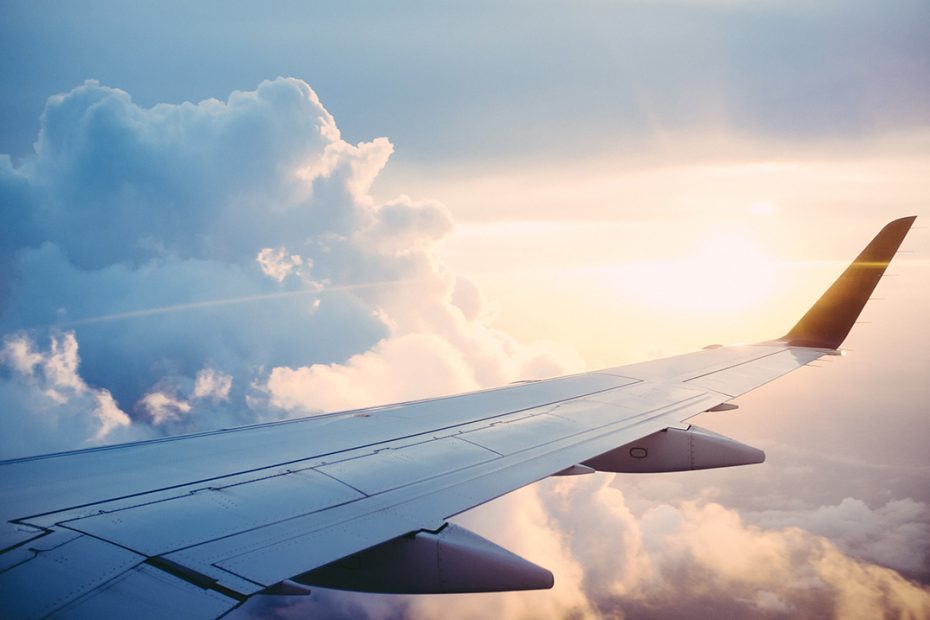 Last November I was at London’s World Travel Market  to report on Japan’s booth for the Japan Journal. (Scroll down for the full story).

WTM is the world’s biggest tourism industry event and everything I heard there suggested that 2014 will be a great year for Japanese tourism. It looks like the industry has fully bounced back from the disasters of March 2011 and should have comfortably met its 10m visitor target for 2013.

Having said that, Japan is still definitely punching under its weight. I heard some frank opinions as to why: the cost of airfares to Japan, language issues, too few or the wrong kind of hotel rooms. I was a little surprised to see how modest the Japan booth was compared to lavish affairs set up by much smaller destinations such as Malta and Sri Lanka. WTM 2013 itself was sponsored by Flanders. As one person commented – looking at the size of the Japan booth, you wouldn’t think that it belonged to the third largest economy in the world.

Still it was good to talk to representatives from Japan destinations large and small. Plenty of ideas for my next trip to Japan! 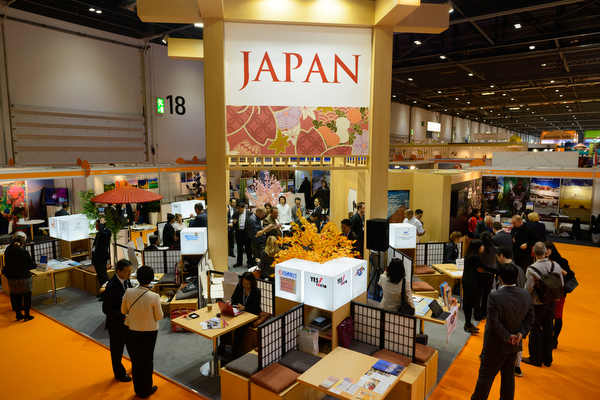 It was no surprise to see Tokyo, Osaka, Kyoto and other major Japanese tourist destinations represented at World Travel Market 2013. But Toyooka in Hyogo Prefecture? Why was there a booth for the small hot spring resort at the world’s largest travel industry event?

I asked Sato Yosuke of the city’s tourism division. The answer, said Sato (who was staffing the booth dressed in an onsen yukata) is thanks to the two stars awarded to the city’s Kinosaki hot springs in the 2012 Michelin guide. Foreign visitor numbers have more than quadrupled since, reaching an estimated 8000 this year.

About half are from Asia, Taiwan in particular, but France is the fastest growing market for inbound visitors. “Now we want to expand the North American and European market,” said Sato. 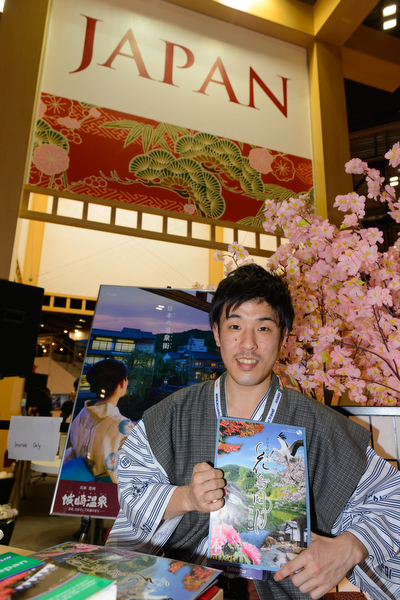 World Travel Market 2013 took place at London’s ExCel convention centre from 4 to 7 November. Advertised as the world’s largest travel industry event, over 50,000 people attended. Japan’s booth was organised by the London office of the Japan National Tourism Organization (JNTO), and hosted a total of 14 exhibitors, including the JNTO itself.

According to the Deputy Director of the JNTO’s London Office, Shestak Valentin, the number of visitors to Japan this year will be approximately 15% up on last year. “We are completely recovered from the earthquake and tsunami”, he said. Many tours for next year are already sold out. The government looks likely to comfortably meet it’s 10 million visitor target for 2013.

Dutch airline KLM recently started a new route from Amsterdam to Fukuoka on the island of Kyushu, a destination that the JNTO is actively promoting. Although Tokyo, Osaka and Kyoto still attract the lion’s share of overseas visitors, there are many other areas doing well, said Valentin. Ski resorts such as Nisseki, Naeba and Nagano have been popular for some time, while “newer” destinations such as Okinawa are promoting themselves energetically. Okinawa is quite unknown, but Europeans really like it,” said Valentin, adding that many are attracted by the rich cultural heritage of the Ryukyu Kingdom.

But Japan tourism is still punching well under its weight. For European travellers, the high cost of airfares to Japan is still a major issue, said Valentin. His office is talking to airlines about arranging cheaper flights, especially non-direct.

The Japanese airlines have good demand from domestic customers for flights, so there is little incentive for them to offer cheap deals, said Valentin. Some European airlines, however, have come up with new ideas. Finland’s Finnair offer flights that change in Helsinki, and which are relatively fast as well as cheap because the fly up over the Arctic rather than across Asia.

A handful of major travel agencies still dominate tourism in Japan, particularly domestic tourism, and several were represented at the show.

“Basically, we do everything: FIT [free independent travellers], groups and MICE [meetings, conferences, incentives, exhibitions]” said Uehara Takayoshi, who was representing the JTB travel agency’s FIT Business Development Group. The days of ubiquitous guided bus tour may be coming to an end, but agencies have diversified into many other areas.

MICE in particular is strong, he said. JTB is cooperating with the JNTO and the Japan External Trade Development Office (JETRO) to target Europe, North America and the big Asian markets. “Tokyo and Kyoto are very interesting cities not just for tourism, but also for business,” he said.

At the other end of the tourism scale, JTB are also seeking out independent travellers. “Just a few years ago, group tours were the main market,” said Uehara. “[But] the travel market is very developed now. FIT is a very important keyword for us and Japan tourism.”

Since March 2011 many domestic travellers have been choosing to visit areas struck by the disasters, he notes. It is a way to show their support and contribute to recovering local economies.

Meanwhile, JTB are working with local organizations over Japan to help them welcome foreign visitors. “The biggest issue we face now is communication,” said Uehara. “Not so many people can speak English and other languages”. Among other things, the company offers help with setting up English websites.

Several of Japan’s major cities also had booths at the event, including Osaka, where Nakamura Tetsuya is part of a new Osaka Government Tourism Bureau team set up to focus on the European and North American markets.

“Osaka is known as a commercial city, not a tourist destination,” he said. “But actually, we have many resources, especially culinary.” The essence of Osakan’s love affair with food and drink is contained in the local word “kuiadore”. It means something along the lines of to ruin oneself through eating and drinking.

That’s why Osaka has an abundance of reasonably priced delicious food. Nakamura pointed out that conveyor-belt sushi was one of many famous foods to originate in the city.

About half of foreign visitors to Osaka are from East Asia, a quarter from South-East Asia, and the remainder from the rest of the world, said Nakamura. But recently, there has been a recognition that the city’s tourist industry needs to focus more on Europe and North America than they have to date.

“We have to make strong contact with media overseas, and also travel agencies who handle Japan tours,” he said. The city’s ambitious target is to almost triple the number of foreign visitors by 2020. 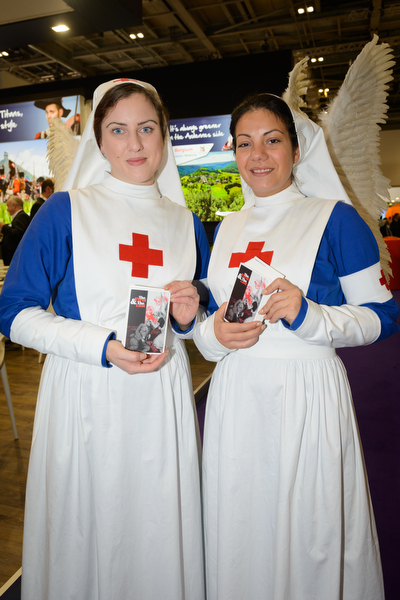 Two angels of mercy on one of the European booths 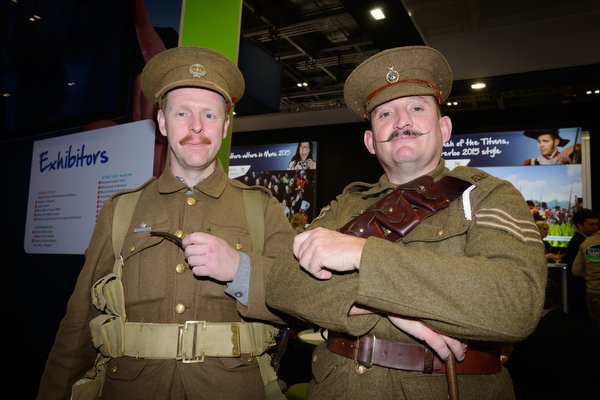 WW1 history was being promoting on the Belgium and Flanders booths

The Okinawan booth at the show was decorated with a beckoning toy iriomoteyamaneko cat, a species that is native to one of Okinawa’s smaller and most remote islands. The prefecture is certainly trying hard to attract overseas visitors — as was obvious from the tourism campaign posters on the London Underground on the way to the trade show venue.

According to Maeda Sayaka of the Okinawa Convention and Visitors Bureau, the campaign was launched in London two months ago to try and increase the modest number of people from the UK who currently visit the islands, about 2500 a year.

“Some come for marine sports, some for beach resorts and food,” said Maeda. “I don’t think people in the UK know about Okinawa. We’ve only really started promoting it over the last two years.” Of those that do come, however, a good number are so-called repeaters. And, perhaps because of Okinawa’s remoteness, many people stay for a week or more once they get there.

Israeli national, Avi Lugasi, was helping staff the Kyoto stall. He started his company Windows to Japan there in 2005, and has worked as a guide in Japan since 1992. He said that the “Golden Route” of “Tokyo – Kyoto – maybe Hiroshima” was still very popular, but that tourists were also seeking out to more unusual locations.

“We have more FIT now,” he said. “People realise that Japan is not just expensive. People are starting to travel out to the countryside and we have more repeaters.” He said that not only has Japanese tourism recovered from the disasters of 2011, but that the disasters actually increased awareness of Japan abroad. The awarding of the 2020 Olympics and Paralympics to Tokyo will likely keep that momentum going.

On the other hand, Lugasi had some frank opinions about the many things he though could be done to help make Japan more welcoming to foreigners.

“The infrastructure is not good enough. There are not enough hotels in peak season,” he said. And when there are hotel rooms available, they may not be the right kind. Japanese couples tend to prefer twin beds, he said, so foreign groups can struggle to find enough doubles.

Some hotels still refuse to accept foreigners because they are worried about communication problems, or foreigners not following hotel rules. On the other hand, some hotels can struggle to understand the requirements of visitors from other countries. When Lugasi took a kosher group to one hotel, he was unable to get the breakfast menu changed from scrambled eggs to boiled eggs.

He pointed out that of the millions of tourists who visit Kyoto each year only a few percent are foreigners. “Some people in the tourism industry don’t care about foreigners,” he said. “There should be more foreigners in positions of authority making decisions about tourism.”

Likewise, he doesn’t think the Japanese government is promoting tourism as actively as it could. “Look at this booth,” he said. “There are developing countries with a much bigger presence (at the show). You wouldn’t think Japan is the third largest economy in the world!”

Nevertheless, he believes that the untapped potential for inbound tourism is huge. This year Japan expects 10 million foreign visitors. “It should be 50 million,” said Lugasi.

“Japan is a very exciting country to visit,” he said. “The best thing that can happen to you in Japan is to lose your way. You wouldn’t want to do that in South America!”

In Toyooka-city, locals are very aware of both tourism’s potential and importance to their economy, said Sato. Like many parts of rural Japan, the area is suffering from depopulation. Tourism is essential or jobs and income. “We have to attract more foreign tourists,” said Sato.

They are marketing Kinosaki Hot Springs as a “yukata-style village”, hence the yukata summer kimono Sato wore at the event. Apart from the city’s seven onsen, which are all free to enter, Toyooka boasts delicacies such as Tajima beef (a relative of wagyu) and Matsuba crab. It also has the oldest Kabuki theatre in Western Japan.

To help residents better welcome foreign guests, the city’s tourism division has organised English lessons for students and city-hall staff. But Sato stresses that there is more to hospitality than just communicating with words. It’s the personal touch and one-to-one interaction at which Toyooka’s small hotels are particularly adept that visitors really appreciate.

“To be honest, I want our ryokan staff to speak English well. But actually, visitors say they just want to communicate – even in Japanese. The hospitality is most important.” 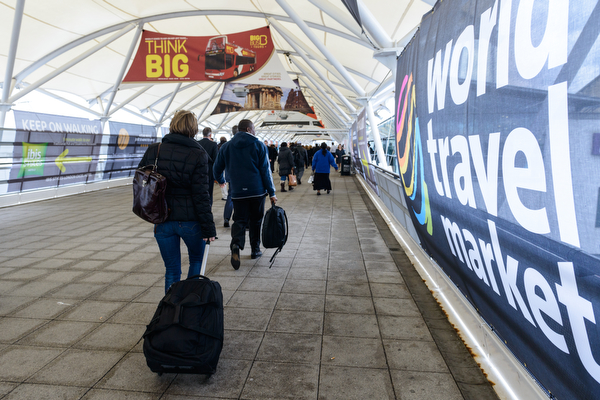 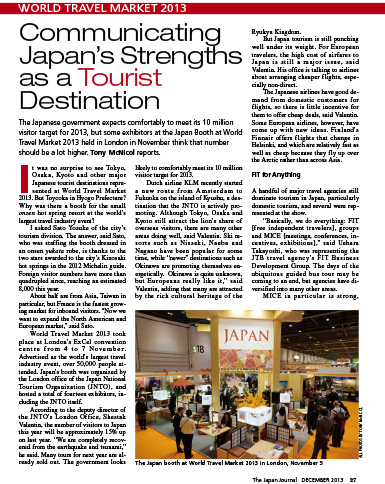 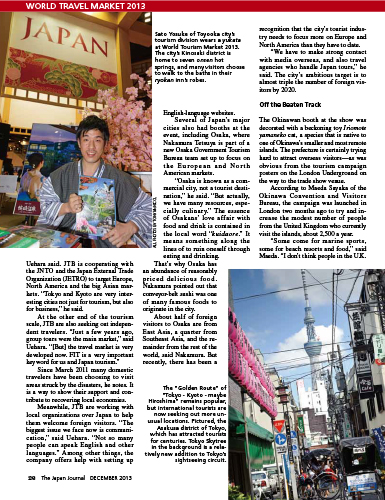 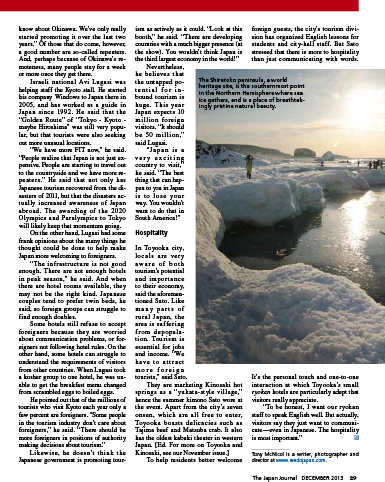