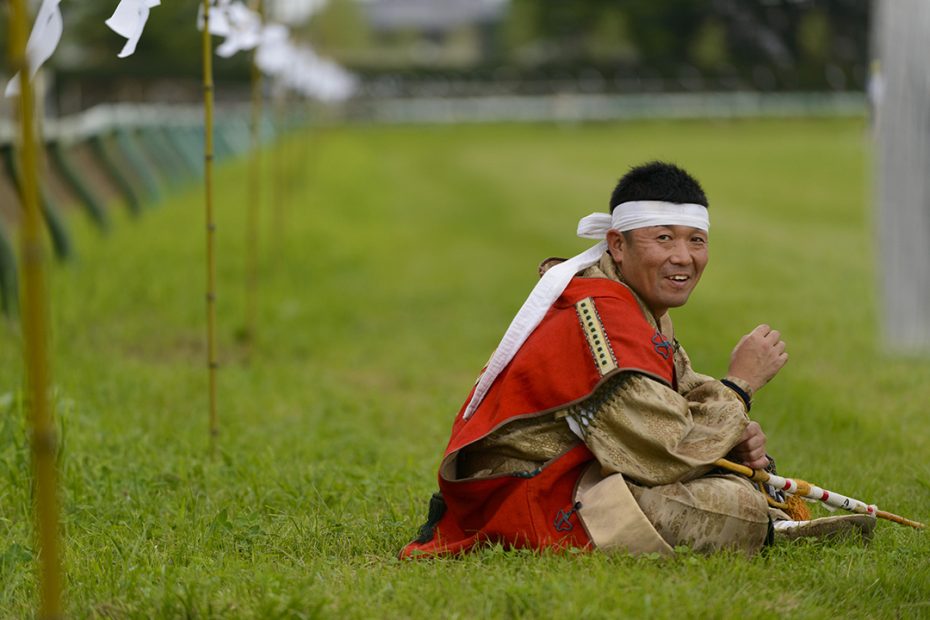 The Somanomaoi festival in Minamisoma, Fukushima was one of the last stories I covered before we moved back to the UK last summer. It’s an incredible event, not least because of what the town of Minamisoma has been through since March 2011. It was the mayor of Minamisoma, Sakurai Katsunobu, who uploaded a video in English to YouTube days after the disasters requesting help for his stricken town. He’s in several of the photos below.

In 21st century Japan, it’s probably about as close as you can get to the samurai spirit. (This year’s event takes place from the 26 to 28 July.)

At the call of a conch, the order for the assembled samurai to leave camp was issued. With a clatter of armor, the riders mounted their steeds. Then, some 500 warriors rode proudly through the town of Minamisoma, their lord at the head of the procession, as they have each year for centuries.

Fukushima Prefecture’s Somanomaoi festival has a history going back over a millennium, but on March 11, 2011 something occurred that the samurai of years past could never have imagined.

That day, the city was first struck by an earthquake then its coastal areas devastated by a huge tidal wave. Radiation leaks from nuclear reactors at Fukushima Daiichi 16 miles to the south led to thousands of the city’s residents fleeing their homes. Many are still unable to return.

No-one would have been surprised if that year’s festival had been cancelled, but after some debate the town decided to push ahead. The festival was smaller than usual, but it took place just four months after the disasters.

Two years later I was in Minamisoma photographing the festival, and was also being filmed myself for one of a series of NHK documentaries on Tohoku’s recovery from the disasters. The third festival after the disasters the Somanomaoi had gone from strength to strength: a demonstration of the incredible resilience and pride of Minamisoma’s people.

It’s tempting to call that samurai pride. The horseback samurai in Fukushima prefecture’s Somanomaoi festival are the descendants of local noble families. And, in some ways, during the festival they don more than just samurai armor.

I was warned not to cross in front of the horses during the procession. During the days of real samurai, that would have resulted in a swift death by a retainer’s sword. During the modern-day festival, as I witnessed several times, it earns a stern and sharp rebuke.

The lord was easy to spot because of a red balloon-like symbol on his back. Likewise, many of the riders had eye-catching emblems on their helmets: dragons, moons and horns. Samurai didn’t care for camouflage. They wanted to intimidate their enemies and impress their comrades. Ambitious samurai wanted their generals to see exactly where they were on the battlefield, and what they were doing.

These modern-day samurai were also keen for attention. For many, no doubt, it was the highlight of their year. To bear oneself well during the festival brings honor, I heard; to display poor horsemanship is a disgrace.

On the first day, I watched the horseback samurai leave the paddock one by one. Towards the end, some of the horses were getting impatient. One abruptly threw his rider, almost crushing him in the process. The irate samurai ignored help, whipped the prostate horse to get it on its feet, then remounted.

During filming, we visited a farmhouse belonging to one former samurai family. They had been forced to move shortly after the disaster. They could still visit their old house, but they weren’t allowed to live there. The fine property was falling into disrepair, and the land that had been farmed for generations was going to seed.

I began to understand why, for people who had lost so much, the festival was so important, why they were prepared to put so much effort into the event, even at the risk of physical injury.

The second day events moved to the town’s racecourse. The samurai armor clad riders who fell during the races hit the ground heavily and the ambulances standing by to see to them were kept busy.

Almost as dangerous was the “flag battle” than followed. The riders gathered on the field waiting for flags to be shot high into the air by fireworks. When the flags drifted back down to earth the samurai jostled to catch them with their whips.

By dusk, the festivities were over and the riders mounted their horses for the journey home. Prior to the disasters, they would almost all have ridden directly from their homes to the festival and back again. But many of this year’s participants were living in temporary accommodation far from their former homes. They had had to borrow horses and stay with friends.

As the weary samurai rode back home through the rice fields, the scene must have been much as it was centuries before. But as I watched them I thought about how much remained the same, and yet how much had changed.