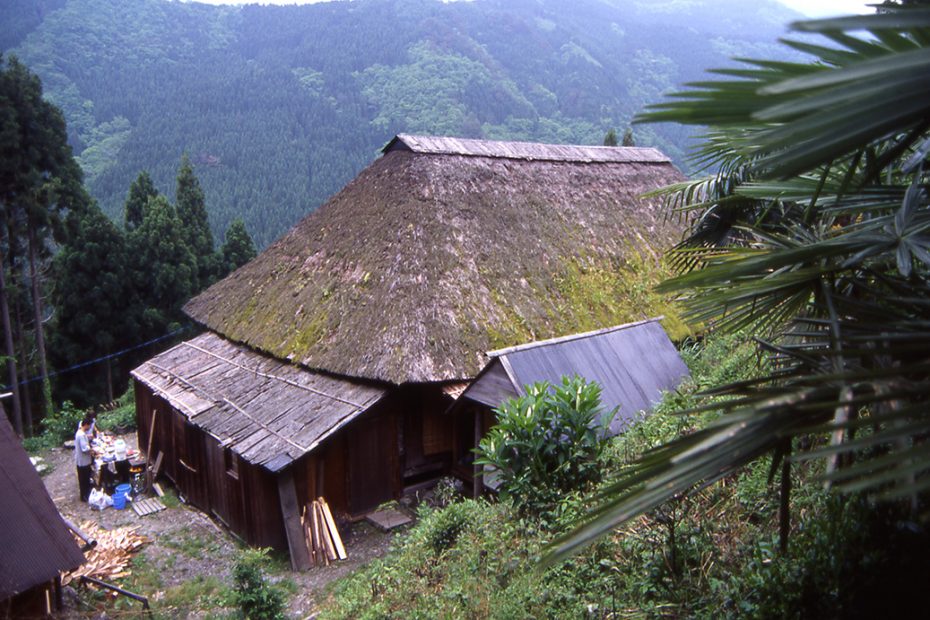 Alex Kerr, author of ‘Lost Japan’ and ‘Dogs and Demons’, is one of the directors of the ‘Chiiori project’, an arts and environmental organization based in a Shikoku thatch farmhouse Kerr bought in the 1970s.

The old farmhouse balances on the precipitous slope of a deep Shikoku valley, so high up that the clouds seem to drift right past its front porch.

‘The house began essentially as an experience of this extremely romantic landscape.’ 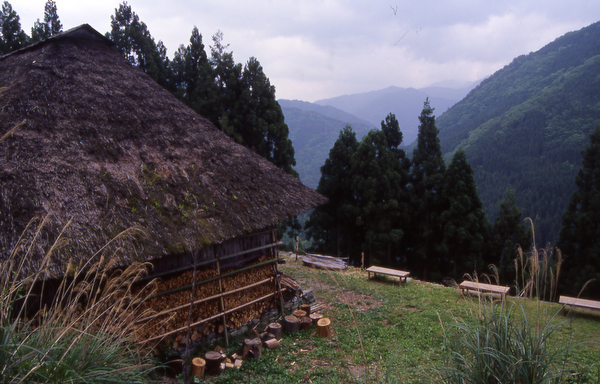 Writer Alex Kerr stumbled on the thatched farmhouse during a hiking tour of Shikoku in the early 1970s. Though still a student, he borrowed the money to buy the house, completed negotiations with the owners who lived nearby and set up home.

Tucked away deep in Shikoku’s Iya valley, if not quite as isolated as when Kerr first lived there, the house is still situated in one of Japan’s most rural most remote and beautiful regions.

But the house has seen some changes over the years and isn’t quite the retreat from the world it once was.

‘Its now become not a commune so much as a community.’

‘With this community as our base we now would like to try and have an impact on the village and the surroundings . . so that we can restore and protect other houses nearby us’

The ‘Chiiori project’, name after the farmhouse, is soon due to become an NPO (Non Political Organization) under legislation introduced in 1998. Although Kerr no longer lives in Chiiori himself, the house is looked after by two caretakers and open to visitors who can stay and appreciate the beauty of the house and its surroundings. According to Shea Ingram, the project’s manager, when JTB conducted a survey of this year Chiiori ranked number three in a list of places young foreign tourists most wanted to visit. Through the Chiiori project’s website Kerr’s and books a thousand people sought out the remote farmhouse last year.

This May the project hosted a party at Chiiori to open a week long exhibition of ‘light sculptures’. The paper wood and stone lamps were created by the American sculptor Sean Ramsey and the exhibition came at the end of Ramsey’s year as the project’s artist in residence.

On the day of the opening party, sitting around Chiiori’s three irori open hearths with Kerr are project staff, local English teachers and many of Chiiori’s neighbors. Although in sparsely populated Shikoku ‘living nearby’ can quite easily mean a queasy hour’s meander along local roads. One of the guests, a young man with a deep tan and a broad smile introduces himself as ‘a lumberjack’. Taku Bando first worked with the project for a few months as a volunteer. Before too long he decided to stay in the area and took a job in the local forestry industry. He’s part of a small current moving against the flood of young people leaving Japan’s rural communities.

Kerr says that Takeshi is a good example how fresh blood is needed to revitalize Japan’s rural areas.

Essentially, he believes that the dwindling community of Iya residents have a huge largely untapped resource in their centuries old traditional crafts and stunning surroundings, natural scenery so spectacular that Kerr calls the valley ‘Japan’s Grand Canyon’.

‘Tourism is definitely the next step. . . . I call it the recycling of the countryside’ 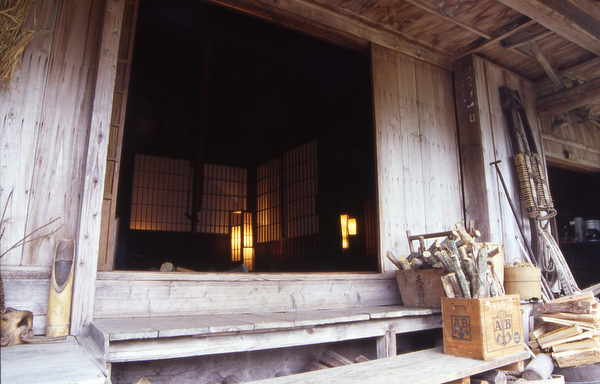 ‘There is a huge demand in Japan for summer homes . . . but until now it hasn’t been provided for properly at all. We [the Chiirori project] are finding that all our neighbors are being contacted by people saying “Can we rent your house for a few months, for the summer?”’

Unfortunately the demand for summer homes, however welcome, has come to late to save most of the traditional buildings around Chiiori. Many have been left to rot away when their owners move into newer ‘more modern’ houses.

Kerr points out how different the Japanese countryside is compared to Europe, where picturesque country villages have their prettiest properties snapped up by high paid company workers planning to commute to the big smoke. There the preservation of traditional buildings has been encouraged.

‘If you look, for example, at the lovely thatched roof cottages in villages outside London, they look very much like what they always were . . but in fact there is now truly a change of population . . . .That’s what needed to happen in Japan but never did’

Kerr says that despite an efficient transport infrastructure and despite having technology that has made telecommuting possible in many other parts of the world, Japanese people have still chosen to live in the cities.

All the same, Kerr and the Chiiori project are already looking ahead to when people choose to make the most of the Iya valley’s heritage. At the heart of the project is careful thought about the ethics and choices of restoration and preservation. They are working to provide an example for other conservationists.

‘When I came into Iya it wasn’t the only thatched house, the only place using an irori – but now we are. . . . When times have changed and now you are the only one. . . then you have a different responsibility to people, to show it, to let them experience it, to make it available’

Kerr stresses the project’s work is much more than simple ‘preservation’. Its about bringing the traditional houses into the 21st century, but as living homes not museum pieces. After putting a stop further deterioration, comes restoration and perhaps a few mod-cons. Kerr hopes that Chiiori could be an example of careful and sensitive modernization.

‘But we have to be very careful about that [modernization], because we want to preserve what is already of tremendous power in that house right now . . . a living lifestyle that is integrated with its surroundings and the with the seasons and the mountains’

Restored houses need to be quite as comfortable as any ‘modern’ home.

‘That is why this process of modernizing at the same time as you preserve needs to happen. Until that happens the house will be seen as quaint, very nice, but get me out of here back to where there is a flush toilet!’

For Kerr there is absolutely no contradiction between the modern comfort and traditional design.

What’s more Kerr stresses that even the ‘so-called “massive expense”’ of restoration is only costly when you compare it with splashing out on a new Japanese house. 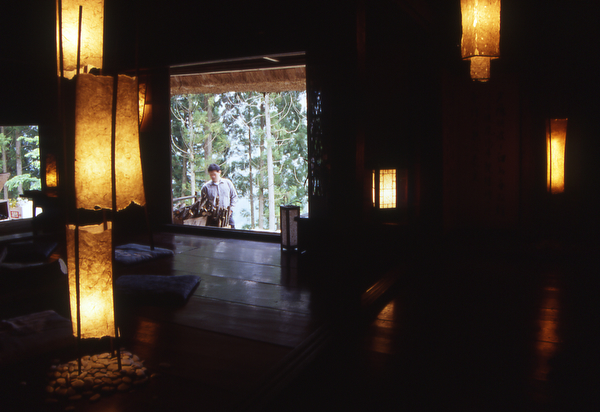 For examples of a modern mix of old and new he looks to architects like Tadao Ando, well known for his sensitive use of concrete as well as natural materials.

‘I have tremendous respect for Ando . . . he gets it . . . there’s nothing wrong with concrete per se. It is how it is used and where it is used.’

According to Kerr, Ando’s very contemporary structures have show a characteristic Japanese sensibility to the ‘essential beauty of the material’. He sees a link between that and traditional architecture in the Iya valley.

Inside Kerr’s house, visitors can sit around the irori open hearth, lean their heads back and watch wisps of smoke curl around the rafters. A spotlight illuminates a patch of the lovingly restored thatched roof. Around it soot from the fire has blackened the thatch and quickly soaks up any stray light. The underside of the roof is a dark as a starless night.

Today the house feels deliciously remote from city life. Its easy to forget that many inhabitants of these dark beautiful houses willingly forsook their gloom for the bright neon metropolis. Its an ambitious undertaking to try and tempt them back.

When Kerr moved into Chiiori he found a scrap of paper pasted on the inside of one of the house’s sliding doors. On it was written ‘kodomo kaerazu’ – ‘the child doesn’t return’. A diary found left in the house provided an explanation. Written by a girl of 17 oppressed by the gloom of the house and slow country life, the journal ended with her running away to Osaka. Her grandfather and grandmother pasted the note upside down on the door praying to reverse their grief but the old couple died still waiting for her return.

Kerr left the note where he found it. Three decades later it’s a melancholy talisman for one of the few traditional buildings left in a Japanese countryside that has seen many of its youths head for the bright lights of the city. But all the same Kerr finds hope in the hundreds of young people from all over the world who make the journey to visit Chiiori.